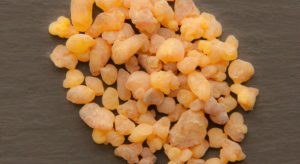 In a recent post about natural treatments for depression, I mentioned frankincense. That sparked some interest. People are more familiar with flower-based essential oils like rose or lavender, but they don’t know so much about the benefits of frankincense.

So today I’m going to look at frankincense in more detail.

Frankincense is a small tree, official name Boswellia frereana/carterii/sacara. native to North Africa and some Arab countries. It can grow in very little soil with hardly any rain. Most of us in the West have heard of it due to its mention in the Bible. But frankincense was prized long before Jesus. People have been burning it on altars and in temples since earliest antiquity.

When the bark of the frankincense tree is damaged, it exudes a resin in drops or tears. The essential oil is extracted from this resin.

The benefits of frankincense in natural healing

Frankincense assists with breathing and being able to breathe more deeply. It is associated both with  taking breath in and with releasing breath. The process of breathing out is releasing the negative. Breathing in and out relates to taking in life and giving out back to life as well.

In the olden days, people believed frankincense would cast out evil spirits. In today’s time, it casts out negative thoughts, which is why it’s so good for depression. A scientific study in 2008 found that ‘incensole acetate, a Boswellia resin constituent… …lowers anxiety and causes antidepressive-like behavior.’

Frankincense helps take people into a deep meditative space. It helps you slow down and deepen the breath. Breathing more slowly and deeply soon produces feelings of calm. So you can see how that leads to prayer and meditation.

The Roman Catholic Church has traditionally used frankincense incense. It both keeps evil spirits away and also gets people in the right frame of mind for worship. And of course that’s one of the reasons the Three Wise Men gave it to Jesus.

The benefits of frankincense don’t stop there. It can help with physical problems as well as mental and emotional balance. It’s been an ingredient in skincare and cosmetics for centuries. It’s a natural antiseptic too, so it’s good for wounds and infections.

Another study in 2012 showed that ‘the resin from the trunk of Boswellia trees contains anti-inflammatory substances.’ Conditions involving inflammation range from asthma (notice the breathing again!) to Irritable Bowel Syndrome and arthritis.

It’s difficult to produce the ingredients which help against inflammation artificially. Nature only puts them in frankincense. So this scrubby little tree really is as valuable as the Wise Men thought it was!